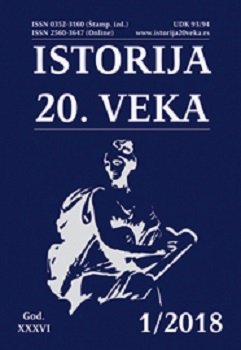 Turci u Kraljevini SHS/Jugoslaviji demografska analiza na osnovu popisa stanovništva 1921. i 1931.
The Turks in the Kingdom of SCS/Yugoslavia a Demographic Analysis Based on the Censuses of 1921 and 1931

Summary/Abstract: The censuses of 1921 and 1931 show a steady Turkish population decline in the Kingdom of Yugoslavia. Turks populated the areas that until 1912 were under Ottoman rule and the Balkan Wars prompted a process of their migration to Asia Minor. Due to this migration, while in 1912 there was about 195,000 Turks in Vardar Macedonia, in the census of 1931 the number of residents whose native language was Turkish (by the statistical methodology of the time) totaled 105,407. The statistics of 1931 reveal that less than two decades of the Balkan Wars, Turks were no longer a majority in any of the administrative areas in which they constituted a sizable part or the majority of the population until 1912. Part of the urban Muslim population (Albanian and South Slavic) reported their mother tongue was Turkish in both censuses taken between the two World Wars, just as they did before the Balkan Wars because of the Turkish influence, culture, deeply rooted Islam and their coexistence with the Turks. This was characteristic of the cities in the northern and western parts of Vardar Macedonia and of several urban centers in the region of Kosovo and Metohija and was also the reason why certain scholars raised doubts about the accuracy of the official statistics. Most of the Turks who lost hope in the reinstitution of the Ottoman rule and who did not migrate to Turkey, were loyal to the authorities of the Kingdom, which frequently relied on the most distinguished individuals of their community as representatives of a significant Muslim minority. That, however, was not the case with the Albanians.