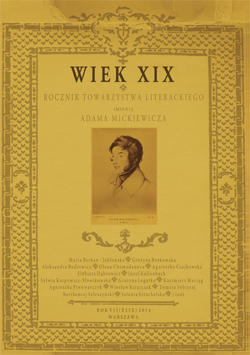 Summary/Abstract: The article discusses Robert Lytton’s work titled Orval, or the Fool of Time (1868) which was an English version of Zygmunt Krasiński’s drama The Undivine Comedy (Nie-Boska komedia). The author analyses Lytton’s attitude to Krasiński’s text (Lytton never read the source text in Polish; his translation was based on a French translation), the problem with the genre of Orval (what is its status? Is it a translation, a paraphrase, or a plagiary?), two prefaces to Orval which differ significantly (in the first one Lytton claims that the text which inspired Orval was “a Polish poem of which the author’s name is unknown to me”; in the second, however, he does mention both the author and the title of the source text), as well as two large nineteenth-century critical studies devoted to Orval (by S.E. Koźmian and S. Tarnowski) and shorter contemporary articles (by M. Giergielewicz and T. Grzebieniowski). The major part of the article is devoted to the comparative analysis of the source text (Krasiński’s drama) and its English version (Lytton’s Orval).