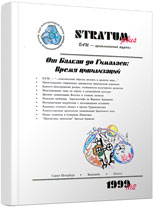 Summary/Abstract: The settlement of the Early Neolithic Age Tsarigrad II was discovered on the North of Moldavia , in a water-meadow valley of the river Reut. Its weak culture layer was studied on a small area. It was possible to collect there more than 2 thousand flint pieces (coneshaped cores, micropoints and backed bladelets, trapezes, microburins, circular and lateral scrapers, bout-shaped retoucher), as well as some fragments of ceramics with plant elements. According to the main features of flint stock the settlement Tsarigrad II can be refered to monuments of transitional type and could be dated as the earliest stage of Neolithic Age.