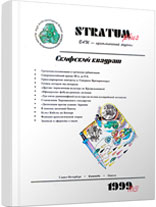 Summary/Abstract: The publication is a first scientific translation from ancient Greek into Russian the Dispositions against the Alans of famous historian Arrian. The translation is made practically literal. It pays a special attention to the military terminology. In the end of the 135 AD, the Alans invaded the Transcaucasia and penetrated up to Cappadocia. For repulse of the invasion, the governor of the Roman province Arrian collected about 18000 soldiers and, probably, came to meet the Alans. The frightened nomads did not take a fight and retreated. This work of Arrian arose from the expedition against the Alans. The work according to the context is divided into the four parts. In the first part (§ 1-10) the Roman army going in march column of the length more of 10 km is shown. Arrian was careful not to be attack in the front, and so he stationed in the front rank the bowmen and the train behind the troops. The second part of the work (§ 11) tells us about a preparation of array. The third part (§ 12-24) describes a disposition of the army. The formation was form up on a valley bordered by heights. On the latter the archers and javeliners, covering the heavy-armed infantrymen were placed, whereas two legions were in the centre of the array. A legionary was armed with kontus (heavy pilum) or lancea. Thus, it is obviously, the weapon of the legionary was usual in this time. The formation of the Arrian’s army was the typical Roman one: the legions in the centre, the auxilia on the flanks. The commander understood his horsemen cannot resist the Alans, rider from the childhood, neither on number, nor on quality, therefore he correctly placed his hors behind the foot. The general with the reserve stood behind the centre of battle-formation. The fourth part of the work (§ 25-31) shows us the possible description of a future battle. According to it, Arrian was as opponents the Sarmatian mounted lancers, mainly, without armour. To assume the Sarmatian charged in this case by wedge is unfounded. The general recommends to approach the enemies on the range of bow shot and then to deafen them with the war-cry and, at the same time, to throw them a volume of missiles. It might exert a psychological influence on the opponents and to force to retreat them. However, Arrian also assumes other variant, i.e. the Alans nevertheless will approach the foot formation. In this case he recommends the latter to be close and to receive the enemy with the wall of shields: just this way an infantry usually repulse a charge of cavalry. Then the nomads should take to flight. Arrian assumes to pursue the opponents by the light horsemen of cohorts which will reach forward through the opened infantry. The fight of the hors should be covering fire by light-armed footmen. The general is afraid of recommence of the flight attack, therefore he orders the legions fast to come, in case of need, again to withdraw them in front. So, in the work Arrian confirms his reputation of the professional soldier, showing itself as a military expert of close co-ordinated action of armed forces. The work is just a fragment as there is not the beginning, which an aim of the work was, and the end. The uniqueness of the fragment is it that only one shows the Roman tactics of the 2nd century AD in detail. The first part of the work has a concrete character. Arrian names the names of commanders, knows who, in the time, led the troops, it is not necessary those which should be according to a «list of staff». The description of the fight is more abstract, i. e. there have not neither the names of districts, nor specific description of arms and tactics of the Alans. It is the descriptive phrases (§ 10; 15; 16; 23) which, in principle, are not necessary in a military disposition. All this speaks us that the specific campaign underlay the work. Certain plan of actions and disposition were worked for the campaign. They then were literary dressed. Probably, the Disposition originally was a separate work of Arrian which then, in an overworked form, might be a member the lost Alanica or it was the separate work. The Disposition might be a member the lost Arrian’s Tactics of Roman infantry in which, as Art of Tactics, the personal military observations of Arrian were put.