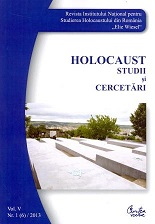 Summary/Abstract: This paper examines Sara Nomberg-Prztyk’s True Tales from a Grotesque Land to show that two very strong motifs emerge: the assault and destruction of Jewish femininity (in general) and motherhood. The assault on femininity manifests through the degradation of the human body, promoting a loss of dignity, even at times at the hands of other women. Arguably, then, the attacks on femininity are also attacks on motherhood. In both cases, the ultimate goal for the Nazis was to destroy Jewish culture. To supplement my argument, I use the theoretical works of Judith Butler and R.W. Connell in my analysis of the destruction of femininity not only of the Jewish prisoners but also the Jewish guards in Auschwitz. I draw on Butler’s ideas regarding the destruction of gender norms (as they apply to women), as well as R.W. Connell’s views on hegemonic and subordinate masculinities as they apply to femininity. The eventual degradation of femi - ninity leads to the destruction of Jewish motherhood. To further explain this phenomenon, I employ the theoretical work of David Patterson, who contends that the Nazis knowingly attacked Jewish motherhood because the Jewish belief in God the Mother is intimately connected to God the Father. To destroy the mother is thus an attack on the Jewish God. Additionally, the paper shows that the Nazis attempted to eradicate Jewish motherhood by destroying what is most precious to the Jewish people, children.