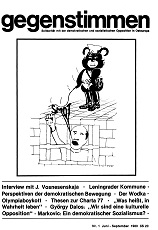 Summary/Abstract: Interview with Julia Voznesenskaya 1940 – 2015 At the end of 1978, news came from the Soviet Union that the secret police of the Kremlin bureaucracy, KGB, had smashed a commune in Leningrad and arrested several young activists. They were part of a group calling themselves "Left Opposition". On December 5, 1978, about 200 students and students demonstrated outside the Kazan Cathedral to protest these arrests. Radicalized by their opposition to the oppressive effects of Stalinist bureaucratic rule, which extended across all areas of their lives, these young people developed a series of leftist political perspectives - Marxism, anarchism, and various "New Left" thinkers from over there. Most information about these ideas is only available in Samizdatform. The following interview was conducted with one of these activists from Leningrad, who was forced to emigrate. In November 1978, at the age of 16, he had to leave the USSR. Leftist Opposition: Programmatic declaration Wladimir Borisow verhaftet As member of Russian group SMOT = Free Interprofessional Association of Workers