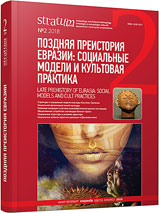 Summary/Abstract: The flint was the basis of subsistence throughout thousands of years of the prehistoric period. Dominating in the production sphere as material for making tools in the Chalcolithic of the South of the Dnieper-Don interfluve, flint and products made of it have naturally held a firm place in the cult sphere. The highest-quality flint products are often found in hoards. Assessment of hoards of flint artifacts has undergone long evolution in archaeological science. Now they are most often interpreted as a part of a complex ritual. Hoards of flint artifacts served as a peculiar marker of sacral space for people of that time and were involved in various ceremonies and rituals, mainly or exclusively connected with mortuary and funerary practice. At the same time, the dominating hoards, small by their size, were personal property of people, and they well reflect personal motivation of people’s behavior in cult sphere. Hoards of flint artifacts open a small window to the big world of mentality of people of the past.