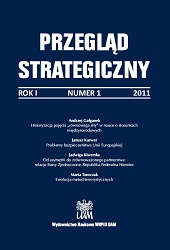 Summary/Abstract: Africa is subject of special interest for member states of the European Union. Since the beginning of the European Community, economical relations with African countries have been part of organization’s functioning. Political aspect of those relations was a result of treaty amendments. During the summit of December 15–16, 2005, the EU Strategy for Africa was adopted by the European Council. The document was an example of comprehensive position of the European Union towards the African continent and served as a basis for the future strategic partnership between the European Union and Africa, confirmed during the second and the third summit of 2007 and 2010. The aim of this paper is to analise mechanisms of implementation of the EU Strategy for Africa. Attention will be paid to indicate the possibility and conditions of effective implementation and to evaluate effects of strategic partnership with Africa.