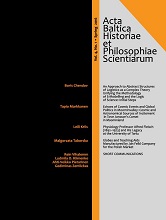 Summary/Abstract: Jan Felkl company from Roztoky (Roztok) near Prague manufactured globes in seventeen language versions, since 1861 also in Polish language. The company was active until 1952, but it ceased to manufacture Polish-language globes as early as in 1914. In the aftermath of the First World War, and with the development of printing business, the demand for Czech globes shrank. It is difficult to estimate the overall output of Polish-language globes manufactured by Felkl’s company throughout the 53 years it operated. From catalogues and the surviving globes we know that terrestrial globes in six sizes, folding globes in two sizes, celestial globes (probably in four sizes), as well as telluria, lunaria and planetaria were manufactured for the Polish market. It is difficult to decide how many editions of individual types of globes were issued. Polish names were compiled by Franciszek Waligórski (one globe) and Mirosław Suchecki .Only 28 globes have survived to this day, including one celestial globe. Most of them are globes of an 8-inch diameter, approved by the Austrian ministries as teaching aids for schools. Nearly half of the surviving globes date from the years 1894–1914. Only ten items are in museums.