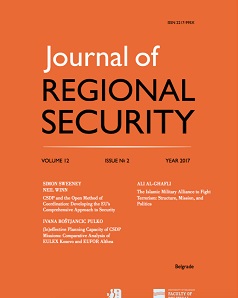 Summary/Abstract: Tis paper evaluates the planning capacity of two Common Security and Defence (CSDP) missions (EULEX Kosovo and EUFOR Althea) in order to assess the efectiveness of CSDP planning process. Both missions sufer due to partial interests within the EU and low positioning of CSDP on political agendas of the member states. Compared to NATO, EU missions’ political control is more much detailed once the mission is deployed. CSDP planning architecture has been considerably reformed since the inception of the frst missions in 2003, however the supervision by the member states is still present in all phases of restructuring and implementation. EULEX planning process includes a well elaborated lessons learnt process, however the implementation of the fndings on the operational level is rather weak whereas EUFOR Althea profted mostly from the access to NATO planning assets. CSDP missions are political missions and their efectiveness seems to be of secondary importance to the EU member states.