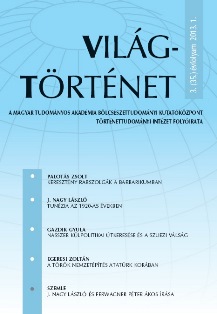 Summary/Abstract: Russia played a significant role in the rise of the Armenian nationalism, but the extent of this role varied in a wide range from backing to op pression. During the 1870s and 1880s the Armenians were supported only secretly and half-hartedly, while Russia’s main target was the Balkan peninsula and the Balkan Christians under the pretext of ’humanitarian intervention’ and ’protection’, but the first signs of the awakening became apparent. The evolution of the Armenian consciousness proved to be unstoppable during the 1890s despite the Russian turnaway and tyranny, introduced in Russian Caucasus, and the bloodshed in Turkish territores. Ultimately when the Tsar and the Great Powers directed their attention again to the Armenians in the late 19th century, a very diverse and mature underground institution appeared on the scene, developed simultaneously in Russia, Turkey and Europe, which was already found suitable for governamental role in the Ottoman Empire.