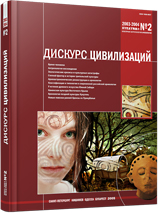 Summary/Abstract: The article discusses the problem of the emergence and origins of the Okunevo art in Southern Siberia. The author considers main manifestations of this art which are expressed in different forms: monumental sculpture, sculpture of small forms, small figurines and graffiti. The analysis of the Okunevo art shows that the bearers of these cultural traditions were not simple bands of taiga hunters but represented rather a complex society with developed hierarchical structure. It was ruled by leaders with theocratic nature of social power who possessed strong influence of non-economic character. The Okunevo art finds clear parallels in synchronous cultures of the Far East and Northern India. It can be supposed that certain similarity between the Yangshao and Okunevo iconographies are conditioned by a common ancestral tradition. However the influence of this ancestral tradition in the Yangshao culture was minimal. On the other hand, connections between the Okunevo and North Indian cultures were long-term and relatively stable including certain cultural borrowings and migrations. The author shares the opinion of D.G. Savinov that the Okunevo cultural tradition was shaped on the border of Northern and Central Asian cultural area on the basis of earlier Neolithic traditions and under influence of different cultural innovations.