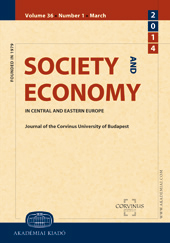 Summary/Abstract: Economic development has always been primarily determined by the human factor, the so-called “human capital” improved by education. In the contemporary world economy characterized by asymmetrical interdependencies and the worldwide networking of transnational companies promoting globalization, the very position and economic development of countries depends also on those competitive advantages created by their governments and social actors, which imply favourable conditions for the rise locally, and/or the inflow from abroad, of transnational companies. Among such “created competitive advantages” the most decisive one is the availability of well-educated, skilled, innovative and disciplined manpower (whose productivity as compared to their wage cost is high enough for increase in profitability), and of local R&D capacities, so important for the transnational companies when choosing their “home base”. Consequently, investments in education and science are the most productive and profitable ones. The commodity pattern of trade is also shaped accordingly, while the type of specialization itself influences education and the dissemination of knowledge in the economy.