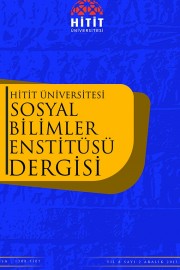 Summary/Abstract: The Ottoman Empire entered to XIX. century with the heavy pressure of the rapidly developing issues of modernization and industrialization in Europe besides historical problems that have accumulated so far. Modernization, pointed to a number of components, envisaged with traditional organizations are identified with religion and culture, and secular institutions and rules rather than new production mechanisms. Particularly in this context, Ottoman modernization chose either a radical way of liquidation especially on administrative and political structure, all socio-economic and socio-cultural structures or this is not possible, it aimed to achieve envisaged changes and transforms by building, the new besides the former by dualistic understanding. The religious orders which have tissue of autonomus organization, and also have ontological and ideological conception have taken their share from these developments. Since Ottoman classical age, especially generalising foundation-lodge model, the orders that were adapted to the system by socializing quickly in a number of ways, at this time it has been intended that they have had to adapt modern, secular, capitalist society understanding or they have had to be pushed out of the system by liquidation. Here this study is prepared with the aim of describing the process of socio-economic changes of religious orders against the repression of modernization, centralization, capitalisation