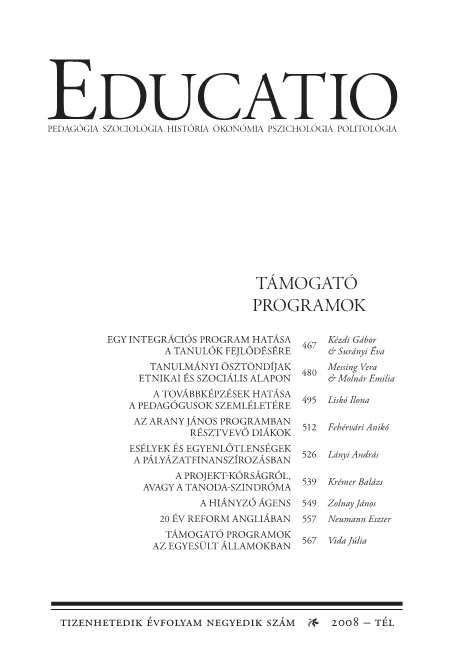 Summary/Abstract: In his article János Zolnay assesses the factors behind the failures of government’s anti-segregation and pro-integration educational policies in the last six years. The performance of children at schools and chances for entering higher education is determined by early school choice to a much greater extent in Hungary than in most OECD countries. Decentralization of the centralized educational system already began before political transition and the process was accomplished by 1993. The new system was based on a more liberal curriculum and output-regulation, normative funding and diversiﬁed school structure. Local municipal councils became responsible for maintaining public schools. Funding for maintenance from state budget is normative and non ear-marked. The government’s integration policies intended to stop and reverse segregation tendencies between schools, branches and classes, but despite the considerable eﬀorts these goals could not have been achieved. The fundamental dilemma is whether opportunities in the sphere of public education can be made more equal while leaving the current system untouched. The problem is that there is no agent at the decision making nor at the executive level which would be willing and/or capable of implementing governmental measures targeted at providing for more equal opportunities. Undoubtedly the policies applied by the local governments enhance inequalities. It is also true however, that parental choices also count and thus unequal distribution of educational services is both a result of the choice of inﬂuential parents and the existence of attractive schools.