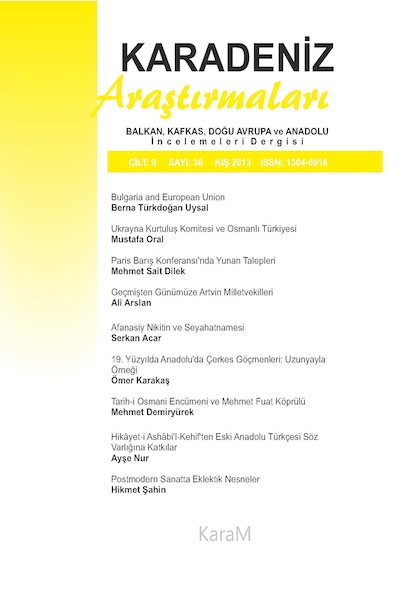 Summary/Abstract: The peoples of the Caucasus against Russian occupation of nearly a century of struggle for the freedom of the homeland continued harsh Shamil in 1859 to delivery in Russia of the last. Sheikh Shamil's being delivered to Russia, had dealt with by occupying the Eastern and western Caucasus. After Russia occupied the territory and peoples of the Caucasian war spoils and prisoners is that the peoples of the Caucasus have seen this as the geography has sought. So we Russia all the cruel, harsh in the Caucasus, the exterminator, uncompromising, derogatory and a compelling policy. As a result of this policy, the Russian Empire's Caucasian peoples that had to leave country. Thus, Circassians 19. At the end of the 19th century the Ottoman Empire was forced to emigrate. Take refuge in the Ottoman Empire itself, Circassians and other various parts of Anatolia, the Caucasus has settled on migrants. One of these places in the Sivas-Uzunyayla. This study Circassians of Sivas-Uzunyayla the Settlement will try to assess the problems they encounter in the wake.