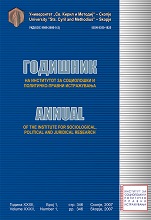 Summary/Abstract: The issue of massive migration into the European Union has transformed into a real misery for many European states. A huge number of people enter the EU states on a daily basis in search of a better future. This work considers the issue of immigration into the EU with particular emphasis to the issues of illegal immigration, organization of the illegal transportation of the immigrants, the price they pay as well as the major routes for transportation of illegal immigrants into Western Eu-rope. Furthermore, an effort is made for summarizing the manners and the instruments which the EU utilizes in its struggle against the illegal immigration, which appears to become a greater concern with the expansion and the deepening of the integration processes.