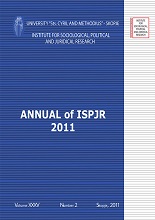 Summary/Abstract: Pluralistic society adopted the discourse of identities on a large scale. Identity is considered a modern phenomenon with its origins in Western individualism, and the problem of how to reconcile the relationship of self-identification and the existence of the “other” in order to answer the question “who am I” and “Where do I Belong” is becoming more scientifically and practically exploited. The Republic of Macedonia in terms of its plurality and in terms of crises in various fields, is a challenge for researchers of identity. Thus, in spring 2011, the research team from the Institute for Sociological, Political and Juridical Research conducted research within the scientific research project Perception of identities among the student population in Macedonia. One of the primary goals of the scientific research project was the identification of self-identity of students and its relation to the sense of bonding with different social roles, groups and affiliations. The results showed the complex relationship between personal and social determinants of identity and the various roles that “I” play in everyday life, and indirectly confirmed the need of society to care about identity and its relations with the “others” among its citizens.