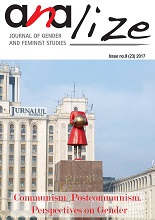 Summary/Abstract: The fall of communism in Albania and Romania brought several social changes. The transition of post-communist countries has had different paths, however general societal and cultural traits seem to prevail, the role of women and gender equality among those. This paper evaluates the accuracy of the observation that after the fall of communism in South East European countries, there is a retraditionalisation of gender roles in the societies. The countries in focus are Romania and Albania. The reason why these countries are taken into consideration is their similar type of communist regime. Compared to all the other countries of the region these two have experienced the harshest communist regimes. The assessment of the hypothesis is done by taking into account several aspects of gender issues, during and after communism for each country. The paper’s attempt to evaluate the hypothesis is a contribution to gender studies in the region of South Eastern Europe.