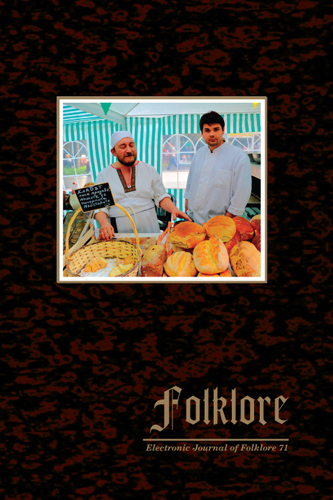 Summary/Abstract: The motif of dressing with celestial bodies is known in Russian, Belarusian, and Ukrainian charms. The formula of ‘wondrous dressing’ is found in charms produced to influence the authority and judges as well as in military, pastoral, hunting, wedding charms, etc. The motif includes several main components: they are the wonderful clothing itself (by light, the sun, the moon, stars, dawn, clouds, sky, thunder, and lightning); the likening of a man to the sun and light, and his voice to thunder; the acquisition of wonderful properties (beauty, courage, the ability to cause fear) and even self-deification; a journey to the mythical world (to heaven, the clouds, the Sun, Mount Zion); and manipulation of celestial bodies. The folklore motifs of ‘miraculous dressing’ and ‘miraculous appearance’ were echoed variously in Russian literary works.