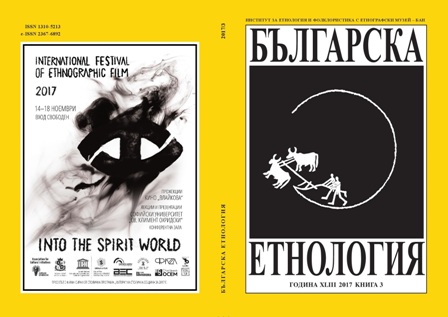 Summary/Abstract: This article is part of ethnological research on the role and function of the public baths in the urban space. It was held in 2017 in the Gorna Banya district in Sofia. In this publication the public baths are seen as one of the markers that construct local identity. In the beginning of the 20th century, the old Ottoman baths were destroyed and new ones were built, which have been preserved to present day in the centre of Gorna banya. The baths are part of the everyday life of the local people. They use their resources for drinking, cooking, washing, but also for trade and medicinal purposes. Furthermore, they continue to observe some traditional family and calendar customs around the public baths.Although the doors of the baths are closed, the square in front of them continues to play a central role in public life. This is evidenced, on the one hand, by the annual celebrations, and on the other hand, by the ordinary people who organize gatherings in front of the public baths via Facebook. The public baths continue to be a central place around which life in the neighbouhood is organized. The local authorities are looking for different ways to fund the restoration of the old building.