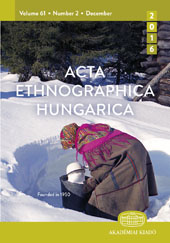 Summary/Abstract: I used this old Latin greeting in my introduction to the 37th volume of Acta Ethnographica Hungarica, and I am using it again now to greet readers of our journal. It has always been important for Hungarian ethnography to publish its research findings in different major languages. Its aim in doing so is to break out of its linguistic isolation and also to join in the mainstream of international scholarship. Already in the last third of the 19th century the Ethnologische Mitteilungen aus Ungarn (1887 – 1907) created a forum for this aspiration. Its editor, Antal Herrmann, considered it his task to present in German the findings of ethnographical research in Hungary, and to make a comparative ethnographical study of the Hungarians and the neighbouring peoples. In addition, he also wanted to ensure a forum for research on Gypsies in Hungary. In addition to this short-lived journal, the periodical Anzeiger der Ethnographischen A btheilung des Ungarischen National-Museums (1902 – 1916, 1922) can be mentioned which brought in German the shorter or longer abstracts of articals already published in Hungarian in the journal of the Museum. The last issue of the Anzeiger was published in 1922.