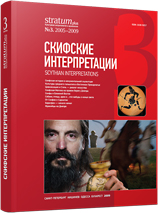 Summary/Abstract: The author studies some archival and fund evidence of post-Scythian settlements and forts. They serve as a basis for a more precise dating of the Thracian complexes in the Lower Dnieper basin. The time span of the Thracian horizon on this settlement is narrowed down to 3rd – early 2nd cc. BC. The life time of the Thracian complexes is limited to 2nd c. BC. The author has widened the list of features of the Thracian culture. Besides the handmade polished pottery described by M.I. Vyazmitina, another feature of the Thracian presence can be square houses with clay walls, sometimes placed on stone foundation, with open hearths, clay oval home altars and big vessels planted in the floor. Localization of Thracian sites has been established (or places of compact settlement of Thracian or related population) on the Zolotaya Balka settlement. Thracian complexes are concentrated in the northern part of the Zolotaya Balka settlement (northern settlement) and on the K section 500-600 m south of it – in the southern part of the Zolotaya Balka on the territory of Gavrilovka fort – in the northern part of the acropolis. The article also defines some buildings on the territory of Annovka, Velikaya Lepetiha and Znamenskoe forts. Thracians of the Lower Dnieper are identified with the known Thracian tribes. The analysis suggests that the population of the Thracian villages in terms of their material culture were closest to the tribes that left Poieneshti-Lucasheuca culture, rather than to the southern Thracian tribes. Material and spiritual culture of the populations of these forts, in their early stages, was dominated not only by Scythian traditions, but also by Thracian ones. The Thracian population appeared in the Lower Dnieper basin not after the Getian invasion but at least a hundred years earlier.