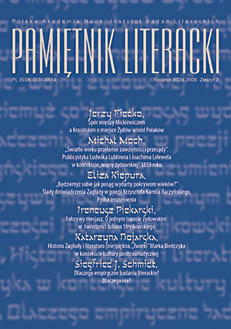 Summary/Abstract: The author analyzes a relatively poorly described in academic papers brochures by Ludwik Lubliner and by Joachim Lelewel issued in response to 1859 Polish-Jewish disagreements brought about by “Gazeta Warszawska” (“Warsaw Gazette”). Most interesting aspect of the brochures in question is their polemic character against the anti-semitic issues present in Polish political commentaries of the 50’s of 19th century, and conforming to such understanding of patriotism whih favors admitting Polish nationality by the various ethnic and religious groups and rejects completely the opposition between “us” – Catholic Poles and “foreign” – Jewish. The anti-semitic discourse, based on historically repeated stereotypical vehemences and superstitions, was, especially by Lelewel, succinctly undermined and demistified.