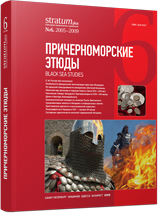 Summary/Abstract: Based on first Moldavian medieval coins, Grosz, which were in circulation since 1377, the author examines heraldic symbols of Moldavian state and dynastic emblems. The paper presents and studies the issue of attribution of the main heraldic element – the head of ancient aurochs – set on the state emblem of feudal Moldavia during the rule of Mushatins’ dynasty. By engaging in a comparative scientific analysis of the so called historical and “graphical folklore” the author studies evolution and offers a typology of differences in heraldic images on the state emblem, which bear a wealthy information about medieval Moldavian symbols. The issues of semantics and typology of both the state emblem as a whole, and heraldic figures it consists of, are also treated for the first time. The paper is aimed for specialists in medieval history, heraldry, art, as well as for students.