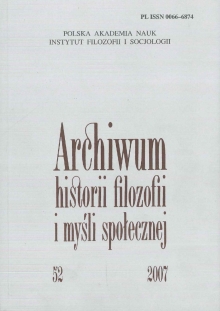 Nihilizm i prawo silniejszego a praworządność w nauce sofistów
Nihilism and the Law of the Stronger vs. Law-Abidingness in the Sophists’ Teachings

Summary/Abstract: The opposition between Socrates’ views and the sophists’ teachings reflects the conflict of ethics and politics and of philosophy and democracy, the form of state regarded by Plato as an outcome of sophistical relativism. Socrates saw the task of a politician in betterment of his own soul and of the citizens’ characters while the sophists taught their disciples utilitarian efficacy in politics and everyday life, essential to achieve success in the system of direct democracy. Cognitive nihilism was created by Gorgias who pointed out the difference between logos, that is, thought and word, and the reality, and, using his dialectical method, criticised the whole previous Greek cultural tradition. The proper ability needed in life was, according to him, rhetorical skill, which however should be used only to achieve just goals. A product of sophists’ education is Callicles, the fictitious personage created by Plato. As an opponent of education based on self-restraint and as an adherent of the theory that according to the laws of nature stronger individuals should rule over weaker ones, he symbolises the negative moral and political consequences of relativism. Moreover, he criticises philosophy as an activity contrary to his pragmatic notion of excellence in public and private life. The law of the stronger was also upheld by Thrasymachus of Chalcedon who claimed that justice is always in agreement with the interest of the mighty. Another disciple of the sophists, Critias, famous for his ruthlessness as an oligarch, was convinced that people obey the laws thanks to their faith in the gods. That faith, according to him, was invented by eminent lawgivers. A negation of immoralism can be found in a treatise by an anonymous sophist, quoted by Iamblichus (3rd/4th century A.D.). Its author glorifies law-abidingness of great men and their devotion in the service of the state and the laws. That text should be regarded as a synthesis of the sophists’ pedagogical views, based on the cult of the society as a community.