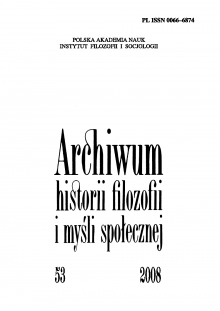 Summary/Abstract: This article is dedicated to the reception of Alexander of Aphrodisias’ treatise On fate (Peri heimarmenes) in the 16th and 17th century, as a part of the Renaissance ‘return” to the ancient literature and philosophy. Despite of several editions and Latin translations (and despite the fact that the problem of fate and predestination was largely debated at the epoch), Alexander’s work was generally rejected by representatives of university philosophy as theoretically inadequate. The article refers the case of P. Pomponazzi, G. Cardano and S. Porzio and shows the reasons of their negative attitude towards Alexander’s theories of contingency and „free will”. Nonetheless the On fate lived a second life outside universities and outside peripatetic philosophy, as it had a noteworthy success among the humanists, especially among those who were engaged in - confessional and religious pole mics.