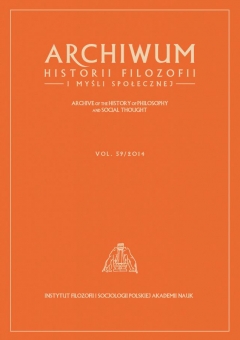 Summary/Abstract: The task of this essay is a reconsideration and rehabilitation of the fourth way of Aquinas’ Summa Theologiae. The argument ex gradibus is first presented with attention to the philosophical-theological context of the five ways, in addition to matters of historical context. It will become clear that the arguments are enthymematic and should thus be read charitably in connection with other aspects of Aquinas’ philosophy (cf. Copleston 1976; Fogelin 1990; Kerr 2001). Moreover, in contrast to the prevailing sentiment that the fourth way should be read primarily in a Platonic light (cf., e.g., Van Steenberghen 1980), I argue that the fourth way should rather be read in connection with other crucial aspects of Aquinas’ metaphysics of being (cf. Urban 1984). Finally, I reconsider some of the fundamental aspects of the argument, e.g., the ‘principle of the maximum’ (cf. Flew 1966, Kenny 1969, Van Steenberghen 1980, Doolan 2008). The upshot is a clearer understanding of what Aquinas actually means in the fourth way, which in turn enables a more informed evaluation of the argument itself.