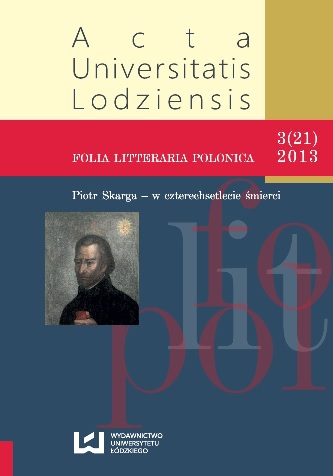 Summary/Abstract: „Prayer for the Fatherland” based on Piotr Skarga’s writings and rightfully associated with his name, is perhaps the most known prayer text within its genre in Poland. It is said in public, aired on the radio and quoted numerously on the Internet. It played a special role on Sunday, 29 March 1981 in the height of the social tension in Poland, minutes before the general strike called by the Solidarity. Cardinal Franciszek Macharski ordered the Prayer to be said in all the churches of the Archdiocese of Krakow and the strike was cancelled. The Prayer was well known to John Paul II who often drew from it in his sermons. Nevertheless, the dating of the Prayer is unclear and its editor remains unknown. The present article addresses the questions of the prayer’s dating and authorship. It points to Piotr Skarga’s Sermons Preached to the Diet (Kazania sejmowe) as the Prayer’s text source, analyzes its structure and content. The article also uncovers an early 1936 version of the Prayer.