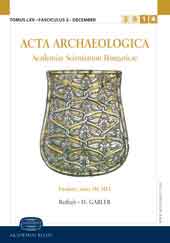 Summary/Abstract: Hallstatt period clay altar from Vát. Data on the cultic objects of the Eastern Hallstatt culture. A unique object was discovered during the excavation of a settlement of the Hallstatt culture at the Vát, Bodon-tábla site (Vas county, Hungary). The find, which the authors have interpreted as a “clay altar”, is in many respects similar to the firedogs of the Kalenderberg culture, yet it is different both in its size and ornamentation. The only real analogue to the object came from Styria, although clay objects that can be interpreted as altars can be found on the entire territory of the Eastern Hallstatt culture. Beside other similar altar fragments, the decorated baking surface of an oven was also found at the Vát site. The structure of the uncovered houses also attests to the uniqueness of the site.