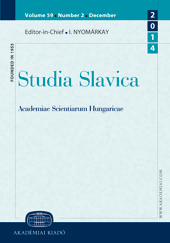 Summary/Abstract: The oldest textual variant of the Russian religious folk song “Forty pilgrims and one more pilgrim” dates from the mid-eighteenth century. The song is a special type of apology, produced by pilgrims for their own laudation and glorification, with the intention to raise the respect of people for them. The wife of the Grand Prince of Kiev wanted to commit adultery with the spiritual leader of the pilgrims, for which God punished her with a severe disease, most probably with leper. The symptoms of the wife’s disease and the circumstances of her recovery indicate that the pneuma-theory, the most ancient concept of the origin of diseases, was familiar to the Russians. In connection to the religious songs analyzed in my paper I found medical practices similar to those in Hungarian folk culture and in the ancient medicine of the Lamaist Tibet. On the basis of this, it can be claimed that the disease of the wife of the Grand Prince was caused by some internal or external “evil wind”. Consequently, the treatment was connected to the wind as well.