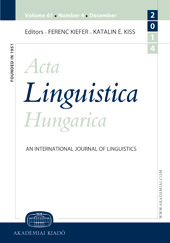 Summary/Abstract: In a previous study of language production, a group of Hungarian-speaking children with language impairment (LI) committed a larger number of errors than typically developing peers on verb inflections that mark person, number, tense, and definiteness (Lukács et al. 2009b). However, the error forms produced often differed from the correct form by only a single dimension (e.g., person, number, tense, or definiteness) with no single dimension proving consistently problematic. In the present study, we sought to determine whether a similar pattern applied to the children’s understanding of verb inflections, as reflected in a grammaticality judgment task. We compared the performance of 17 Hungarian-speaking children with language impairment (LI) between ages 8;0 and 11;9 with typically developing children between 6;10 and 11;1 years individually matched on receptive vocabulary raw scores (VC) and also to a control group of children matched on chronological age (AC; between 8;1–12;1). We obtained grammaticality judgments for 68 sentences, including 56 ill-formed sentences that contained a single error of person, number, tense, definiteness, or morphophonology. As the AC group performed at ceiling, the analysis focused on comparisons between the LI and VC groups. Besides comparing accuracy scores in the two groups, we tested how well performance could be predicted by a test of grammatical comprehension (TROG) and a measure of nonword repetition ability obtained prior to the administration of the grammaticality judgment task. There were no significant group differences in the accuracy of grammaticality judgments. Both groups recognized well-formed sentences, and agreement errors of number, person or definiteness, significantly more accurately than tense or morphophonological errors. Although there was no difference between performance levels of the LI and the VC groups, we found differences between the two groups in the types of measures that were most closely tied to performance on the grammaticality judgment task. Performance in the LI group was strongly associated with nonword repetition span, while in the VC group, TROG performance was associated with grammaticality judgment performance. These results suggest that the same level and pattern of performance can be supported by different background mechanisms in typical and atypical language development.