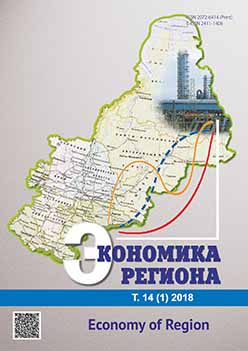 Summary/Abstract: The article develops the methodology of using investment multipliers to identify growth points for a regional economy. The paper discusses various options for the assessment of multiplicative effects caused by investments in certain sectors of the economy. All calculations are carried out on the example of economy of the Republic of Tatarstan for the period 2005–2015. The instrument of regression modeling using the method of least squares, permits to estimate sectoral and cross-sectoral investment multipliers in the economy of the Republic of Tatarstan. Moreover, this method allows to assess the elasticity of gross output of regional economy and its individual sectors depending on investment in various sectors of the economy. Calculations results allowed to identify three growth points of the economy of the Republic of Tatarstan. They are mining industry, manufacturing industry and construction. The success of a particular industry or sub-industry in a country or a region should be measured not only by its share in macro-system’s gross output or value added, but also by the multiplicative effect that investments in the industry have on the development of other industries, on employment and on general national or regional product. In recent years, the growth of the Russian was close to zero. Thus, it is crucial to understand the structural consequences of the increasing investments in various sectors of the Russian economy. In this regard, the problems solved in the article are relevant for a number of countries and regions with a similar economic situation. The obtained results can be applied for similar estimations of investment multipliers as well as multipliers of government spending, and other components of aggregate demand in various countries and regions to identify growth points. Investments in these growth points will induce the greatest and the most evident increment of the outcome from the macro-system’s economic activities.