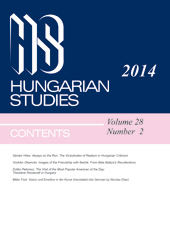 Summary/Abstract: In this article I offer an overview of the ways in which the term realism has been understood and used in Hungarian literary criticism, from the introduction of the term into Hungarian discourses in the middle of the 19th century to the post-1989 period, when the term had to grapple with the legacy of its appropriation by the Socialist regime. I examine three specific junctures in the critical trajectory of Realism: the introduction of the term in the 1850s, the uses and abuses of the term by Marxist ideologues, and finally the aversion towards the term that emerged in the post-Socialist era. In addition to examining pivotal moments in the history of this critical concept in Hungarian literary discourse, my inquiry also offers a critical perspective from which to consider an enduring anxiety concerning the achievements, past and future, of Hungarian literary culture, an anxiety that finds expression in a symptomatic concern with the ways in which tendencies in Hungarian culture do or do not relate to cultural developments outside of Hungary.