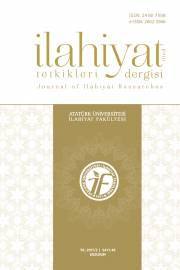 Summary/Abstract: It is very well known that holy books -which are based on revelation- have adopted many literary arts as a wording style. This stylistic structure gives a flavor of fascinating expression power to those texts. This study aims to reflect the optimistic approach of Holy Qur’an within the art of contrast (tıbak) which is one of literary arts. It investigates the reason of mentioning the positive before the negative, where both are mentioned consecutively in the text and also related subtleties of meaning. This study mainly focuses on the interpretations of verses which exemplify various types of art of contrast, where the reference point is divine and human deeds. Especially with regard to art of contrast, verses that mention both deeds (divine and human) firstly mention the positive one and then the negative one. This wording style justifies that -as it is observed in the cosmic universe- optimism is dominant in the holy Qur’an (which is the verbal embodiment of cosmos). In some of the verses, the negative precedes the positive; however, this does not go against the optimistic wording style of the Qur’an, because those cases are absolutely due to the necessity of the context and also there are logical reasons for that.