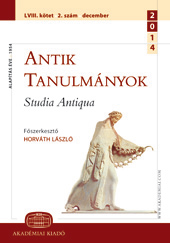 Summary/Abstract: The purpose of this paper is to carry out a case study on the Apollonian Medea-in-love portrayed in the 3rd book of Argonautica and puts forward several aspects on love theme and epic characteristics inspired by tradition of the classical Athenian tragedy, particularly by Euripides. This analysis emphasises that Medea of Euripides was not the sole tragic model of the Apollonian heroine by demonstrating the Apollonian Medea depicted in the 3rd book echoes Phaedra’s characteristics from Hippolytus-tragedy (cf. among lines 373-524) with regard to the motifs of uprising and wicked love. Finally, it attempts to address few secondary literary elements also inspired by Euripides’ Hippolytus, which underline the theory that Apollonius alludes to Phaedra’s state of mind and the play in greater details.