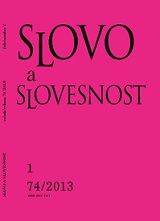 Summary/Abstract: This study analyzes the thematic characteristics of journalistic texts written by the Czech Catholic intellectual and journalist Ladislav Jehlička (1916–1996) and the writer, journalist and representative of pre-war democracy Karel Čapek (1890–1938). The main aim of the article is to illustrate how Jehlička’s pre-war journalism does not correspond to what has been generally accepted by the majority of literary critics – that it is a mere manifestation of his sympathy for nationalism, Nazism, and Fascism. The methodology used was, based on the quantitative characteristics of the text, the analysis of the thematic oncentration. The study detected unexpected similarities between both authors; specifically, it revealed that the texts by Jehlička and Čapek are focused on the same problems, e.g. young people and their future, the role of political parties and the circumstances determining a nation’s existence.