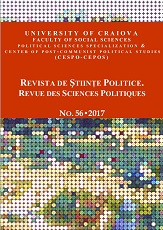 Summary/Abstract: The economic crisis represents an ambivalent phenomenon inducing both negative, dysfunctional effects and consequences and also positive, functional ones. Of course, positive aspects are not that prominent and they mainly refer to the adoption of a more balanced behavior by economic agents and population, general decrease of prices, especially in the real-estate field (in certain cases, properties can be purchased at a third of the price required before the crisis). The negative effects or the general risks refer to the quality of the people’s social-economic and cultural life at a national level, while, at the global level, the economic crisis affected the political and economic hierarchy of the world states. The article is analyzing the statistical data at European and national level, in order to confirm us that the economic crisis from 2007-2008 was characterized by the increase of unemployment, which had led to an increase of severe pauperization rate and a severe deterioration of quality of life.