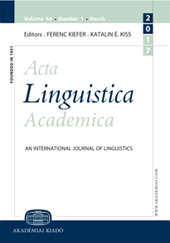 Summary/Abstract: By examining ϕ-agreement in relative clauses, this paper investigates the relation between syntax and morphology in terms of the person feature. English relativized subjects appear to have different phi-features for the purposes of subject–verb agreement and binding relations. The verbal morphology uniformly displays 3rd person whereas reflexive binding shows 1st/2nd person in addition to 3rd person. If subject extraction must trigger an invariable verbal form as Ouhalla (1993) argues, the binding alternations cannot be accounted for. This paper proposes dual properties of the person feature based on Harley and Ritter’s (2002) feature geometry, and argues that relativized subjects may not obtain both properties of the person feature from the head noun via Agree. This partial agreement causes morphosyntactic variation in English and cross-linguistically in Distributed Morphology (DM). The current analysis demonstrates that referential and morphological (under)specifications are kept separate under the constraint of the syntactic operation Agree.