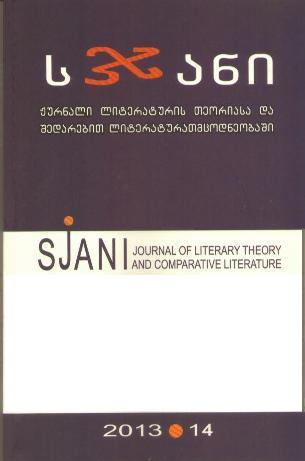 Summary/Abstract: About “Belyovski’s Uezd”, or Literature as Overcoming of Exile. Summary Key words: Literature in exile, national culture, traditions, models of literary development. In the article «On “Belyovskii District”, or Literature as Overcoming of Exile» by A.I.Chagin the problems of literary development in exile are being examined through the literary experience of the first “wave” of Russian emigration after the October revolution of 1917 (the 1920 – 1930s). Touching upon the discussions in émigré literary criticism of that time concerning the problem of opportunity for a national literature to exist in exile, the author demonstrates how faithfulness to the traditional roots of the national culture (to “Belyovskii district” – to a spiritual image of motherland, according to the allegoric expression by I. Bunin) gave to Russian émigré literature strengths not only to survive, but to unite as well in comprehension of its historical mission, its task to preserve, to save the national cultural, literary tradition. This idea lived in Merezhkovskii’s famous words: “We are not in exile, we are in message”. Appealing to the idea of succession, considering itself as a keeper of the traditions of Russian spirituality was connected for Russian émigré literature in many respects to opposition to the new situation in the sphere of culture in Russia at that times. In particular, obvious tendency of rejection of the classical tradition in Russia in the 1920s was considered by many émigré writers as “the new eclipse of Pushkin’s sun”. Besides, the author of the article cites the extracts from the speeches by D. Merezhkovskii and Z. Gippius who raised sharply the question of absent freedom of speech in Russia and asserted that it was emigration which “has given for the first time a free speech to Russians” (Z. Gippius). The author emphasizes the idea of relativity of these – absolutely natural – judgments, these apprehensions of destiny of Russian culture at the far motherland and reminds that two incomparable points were equalized here: a freedom of speech as one of the laws of a state – and a freedom of creative work, i.e. a freedom of spirit which is connected, certainly, to a freedom of speech and depends on it, but isn’t restricted with its limits; in fact it is born, first of all, by a scale of a personality, of a talent. And in spite of the fact that the writers in soviet Russia had to assert their freedom of spirit in absence of a freedom of speech and all the rest kinds of freedom – still we know that the representatives of the elder generation О «Белёвском уезде», или Литература как преодоление изгнания (such as Korolenko, Akhmatova, Mandelstam, Pasternak, others) hasn’t sacrificed their freedom of spirit. There is one more significant reservation in the article which is connected to the situation with a freedom of creative work in Russia abroad.