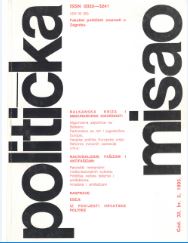 Summary/Abstract: For the political principle defining the political will of fascism, the survival of a national state (regardless of whether it already exists or is to be formed; in the latter case, this gives legitimacy to antagonism) is in itself determining enough reason and the unconditional imperative of political activity. The concept of state underlying the political activity of fascism is solely an empirical notion or a sensory concept of community. Another more paramount reason is transcedental, unfeasible, as it were. According to the same nation-building principle, another nation, within and without a particular state, is a priori suspicious since it must be craving for its own state by encroaching upon another nation’s state. Thus this fascist political principle, which wants to turn this nationalist maxim into a constitutive principle, cannot ensure either internal (i.e. a state) or external peace and perishes in a civil or world war. For antifascist activity, however, it is not central whether it takes place in this or that state. The basis of antifascism is the concept of the state which in its most positive and purest form came to the fore in the bourgeois political thought. In it the central concept of the state, considering the rationale for the existence of a state, is clean-cut and thus general, although a possible historical existence of a state is empirical and particular. The fundamental motive of antifascism is not national and patriotic but primarily moral and political and, possibly (derivatively), pat:iotic. Which state deserves to exist is determined by external social conditions for the realization of the concept of freedom, as complete as possible. This makes room for the formation of broader multinational unions, even federal states. The world federation is a bourgeois political ideal, whose realization represents the ultimate purpose of world history.