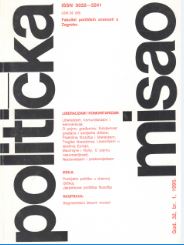 Summary/Abstract: The author claims that classical liberalism solely recognizes the individualist perspective of maximizing individual profit and totally bypasses the issue of solidarity. Only as the consequence of workers’ movement and the Marxist critique of the freewheeling market did the welfare state emerge to make up for the lack of solidarity. The welfare state, however, is based on a combination of the opposing principles: freedom and social justice, the state of law and social responsibility, the right to an unfettered individual development and the limitations to individual freedom through welfare institutions. The contradictions and the crisis of the welfare state have resulted in a series of criticisms. Contrary to the liberal and social-democratic critique, the author bases his position on the precepts of a bourgeois society as an ambience of civic solidarity. Such an attitude takes the civic responsibility for granted not only regarding legal and political but also social prerequisites for practising civic autonomy.