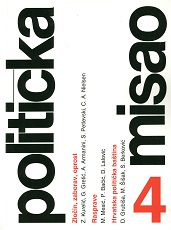 Summary/Abstract: Starting from Agamben’s term “Gesture” – interpreted as “communication of communicability” – and having in mind links between Gesture and politics, this text opens the possibility of reading Guy Debord’s ideas into the heterotopia of the Prologue of “Dundo Maroje” by Croatian Renaissance playwright Marin Držić. In this way, the posssibility of cultural criticism has been tested on the basis of an insight into social performances structured as acts in a play; from the crisis and the culmination to the dramatic solution, and back again. The title syntagm “theatre of shame” is being argumented with the thesis that spectacularized societies archive shame by false identity witnessing. This paper suggests that our confrontation with the Other in ourselves – exemplified through the lack of capacity to witness identity in the media – leads to what Agamben describes as the slipping away of the truth of witnessing from the jurisdiction of the archive.