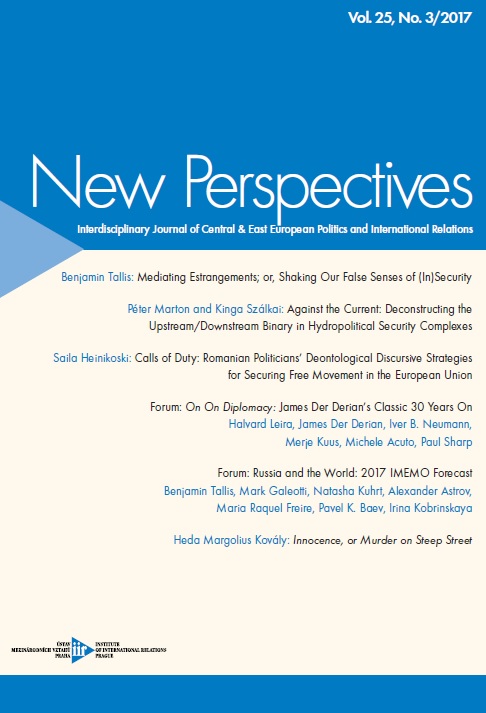 Summary/Abstract: Hydropolitics, established as the “study of conflict and cooperation between states over (predominantly riverine) water resources that transcend international borders” (Elhance,1999: 3), is a discourse that often serves to empower states – as the owners of waters – above other actors. Departing from this point, and taking a critical perspective on the subject,combined with an interest in the spatial aspects and spatial dynamics of security issues,we shed light on a ‘virtual vertical’ aspect of riverine hydropolitics. Hydropolitics is often framed, through a binary and distorted representation of empirical reality, as upstream-downstream state relations. In this article we challenge the presumed straightforward validity of this upstream-downstream framework in universal terms as well as in a case study of Hungary, to draw attention to the arbitrary tendency to construct downstream identities as a feature of hydropolitical security complexes (HSCs). We find that whether or not this is the motive behind the desire to project a downstream identity, per implication of its discursive enactment, governments as well as societies may be insufficiently sensitive to their ‘upstream’ responsibilities arising from the relativity of what is, respectively, upstream and downstream along a river.