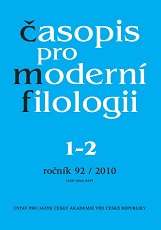 Summary/Abstract: Vladimír Skalička (1909–1991) was professor of general linguistics at the Faculty of Arts, Charles University, and a member of the second generation of the Prague Linguistic Circle, specifically a typologist and a Finno-Ugric scholar. Having originally studied Latin in Prague, he showed an early interest in Finno-Ugric languages and Turkish, but also many other languages. Having no predecessors, he was largely self-taught, though he acknowledged Vilém Mathesius as a major source of influence (apart from Ferdinand de Saussure), i.e. within the general framework of the Prague Circle. Gradually his scope of interest grew broader, covering hundreds of languages in all imaginable aspects. The two years spent in Finland predetermined his primary preoccupation with Finnish so much so that he founded a fullyfledged study of Finno-Ugric languages at Charles University in the 1960s. In addition to his translations from Finnish and Hungarian he published over 200 articles and eight books on various linguistic topics. Skalička is probably best-known as the author of an original linguistic typology which had been his life-long concern.