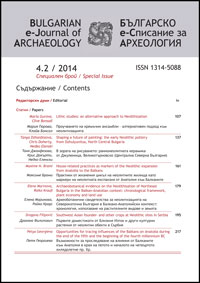 Summary/Abstract: The study presents archaeobotanical analyses of four Early Neolithic sites (Koprivets, Orlovets, Dzhulyunitsa, Samovodene) from Northeast Bulgaria. Those archaeobotanical data are linked to comprehensive series of 14C dates for the early Neolithic in northeastern Bulgaria allowing their attribution to high resolution radiocarbon chronology. In the considered sites the dominating cereal crop during the Early Neolithic is hulled barley (Hordeum vulgare var. vulgare), followed by einkorn (Triticum monococcum) and few emmer (Triticum dicoccum) what is a clear difference from the southern parts of Bulgaria where during the early Neolithic the dominating cereal crops are einkorn and emmer. Further principal crops, present from the earliest phases of the Neolithic in the region are lentil - Lens culinaris, pea – Pisum sativum, grass pea – Lathyrus sativus/cicera and flax – Linum usitatissimum. Wide spectrum of finds of gathered plants (at least 11 taxa) reflects the use of the natural vegetation resources. Useful for reconstructing the vegetation and land use in the Neolithic are also wood charcoal identifications, indicating apart of oak forests also presence of open vegetation, riparian forests and wetlands. The relatively open vegetation in the surrounding of the early Neolithic settlements could be one of the reasons why the corresponding locations were chosen by the Neolithic people to settle there. On the other hand this open vegetation could be caused by the Neolithic land use and animal husbandry, which have also led to certain reduction of the forests in the immediate surroundings of the settlements.