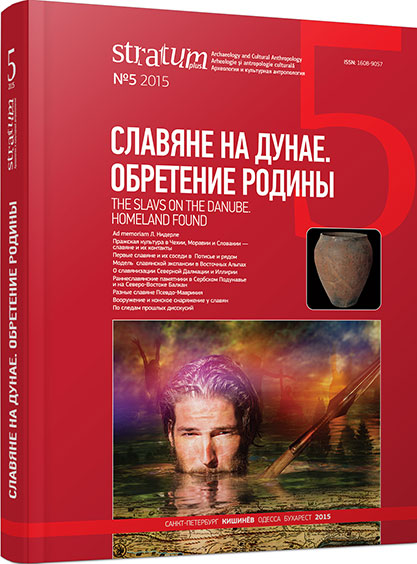 Summary/Abstract: The article shows how the interest in these kind of sites begins after 1944 following certain changes of political nature. The early stage of research is linked to the discovery of sites from the later chronological group Hlincha I (Popina — Garvan). It was just later when sites with Penkovka type ceramics were found.The catalogue includes 49 sites (mainly Byzantine castellae) with Slavic pottery finds. Finds of fibulae are added by exception, but only when they were found in combination with Slavic pottery.Beside these certain sites of Slavic presence, the author included a few finds of vessels from uncertain environment.This review of Slavic materials shows the following tendencies:— The finds of Penkovка type ceramics are exclusively from castellae, which confirms the suggestion that this first wave of Slavic settlers in Byzantium were predominantly foederati. Finds of such ceramics could only relate to the first generation of infiltrators. The next generation could hardly be connected to this low level of culture. The predominance of Penkovka type pottery should be directly associated (especially in Dobrudja) with the Penkovka culture on the territory of the modern Moldova and Ukraine;— The second wave of Slavic settlers (i. e. Vălčidrăm — Yakimovo group) lived far from the still existing (or abandoned) castellae;— Above some castellae, in which Slavs from the first wave are attested, there is a noticeable trend for the dwellings of colonizers from the following Slavic waves to appear on their ruins.