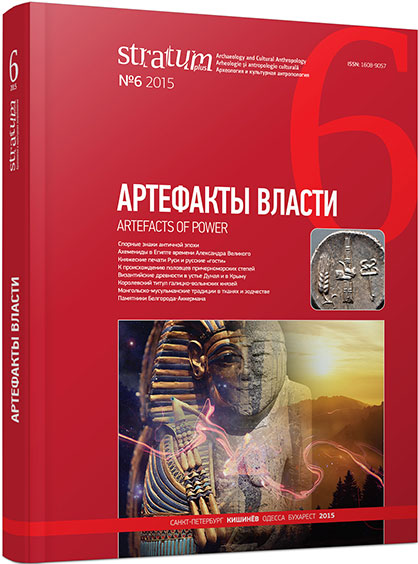 Summary/Abstract: Heraldic pendants are metal or carved bone objects of the trapezoid or figured trapezoid form with a suspension loop. On one or both sides of these objects there are representations of Old-Russian princely signs (original pendants) or imitations of such (replica pendants). The original pendants served as credential signs of princely officials in the 10th and 11th centuries. The replica pendants were prestigious female ornaments in the 12th and 13th centuries.At present, over 60 heraldic pendants of the 10th—11th century are known. In the first half and the middle of the 10th century, prince’s officials used exclusively pendants in white metal (silver?) as credentials. Credential signs of the same kind were predominant during the autocratic Great-Prince’s rule of Vladimir Svyatoslavich (980—988). However in the same period, there appear credential signs made from a copper alloy. During the Great-Prince’s rule of Vladimir the Saint and his governors (988—1015), the latter type of credentials became still more widespread. Moreover, after the death of Vladimir the Saint (†1015), pendants from copper alloys became absolutely predominant.Heraldic pendants have been found throughout the vast area from the Kama River in the east to as far as the Neman and Lower Daugava River in the west and from the Ladoga region in the north to as far as the Dniester in the south. As it seems, the activities of the bearers of these pendants took place not only in the territory of the Old-Russian state but also far beyond its limits.