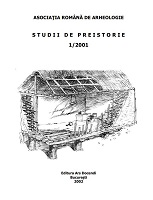 Summary/Abstract: The studied material was recovered from sondages in the site TEL 008 in the Teleorman river valley. From the archaeological point of view the sondages have touchet two Neolithic levels, Boian-Giuleşti and Boian-Spanţov. A total of 30 remains have been recovered from the Boian-Spanţov level and 325 from the Boian-Giuleşti level. They are assigned to the species Unio crassus, Unio pictorum and Unio tumidus (bivalves), Planorbarius corneus and Cepaea vindobonensis (gastropods) and Emys orbicularis (freshwater tortoise). We can conclude that the most of the identified species are characteristic of aquatic environments and wetlands, which caracterize the Teleorman river valley. In spite of their possible secondary origin in the majority of cases, there is evidence (especially for the bivalves) for use in the diet of the inhabitants of the river valley.