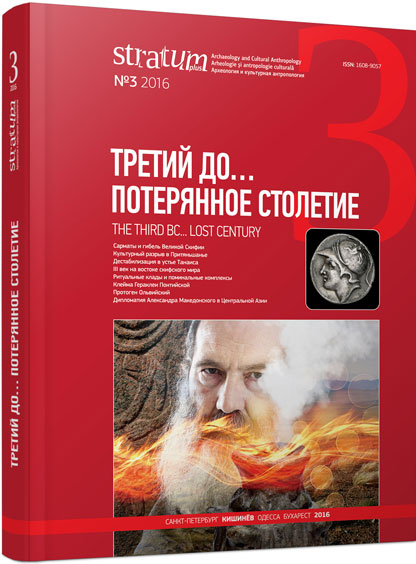 Summary/Abstract: The article briefly analyses the ethno-cultural situation in the east of the Scythian world in the 3rd century BC. The investigation is focused on the Scythian-like cultures of the 6th—3rd centuries BC inhabiting the territories from the Upper Ob region and Kazakhstan to Transbaikal and Manchuria, including the cultures of Northern Xinjiang (China) and Northern China itself that are barely known in Russia. We considered the problem of propriety of dating some relatively late Scythian-like burials of Tuva and Mongolia in the 2nd—1st centuries BC. It is concluded that these burials should be dated by the period no later than the 3rd century BC. Many artifacts described as the “chronological indicators of Xiongnu” cannot be regarded as dating materials because they had been common for eastern historical and cultural community of the territories from Northern China to Transbaikal before the Xiongnu culture existence. Paleoclimatic and archaeological materials and written sources describe the 3rd century BC as a period of crisis of Scythian-like nomadic cultures and a time of flourishing for the cultures that involved in complex economy of forest steppe. The reasons for the decline of nomads cultures differ. In Northern China the decline of nomads and Scythian-like culture was directly related to the expansion of the agricultural kingdoms of China that ended with their consolidation in the year 221 BC and the displacement of nomads to the northern semi-deserts, where in the 2nd century BC the archaeological culture of Xiongnu appeared.